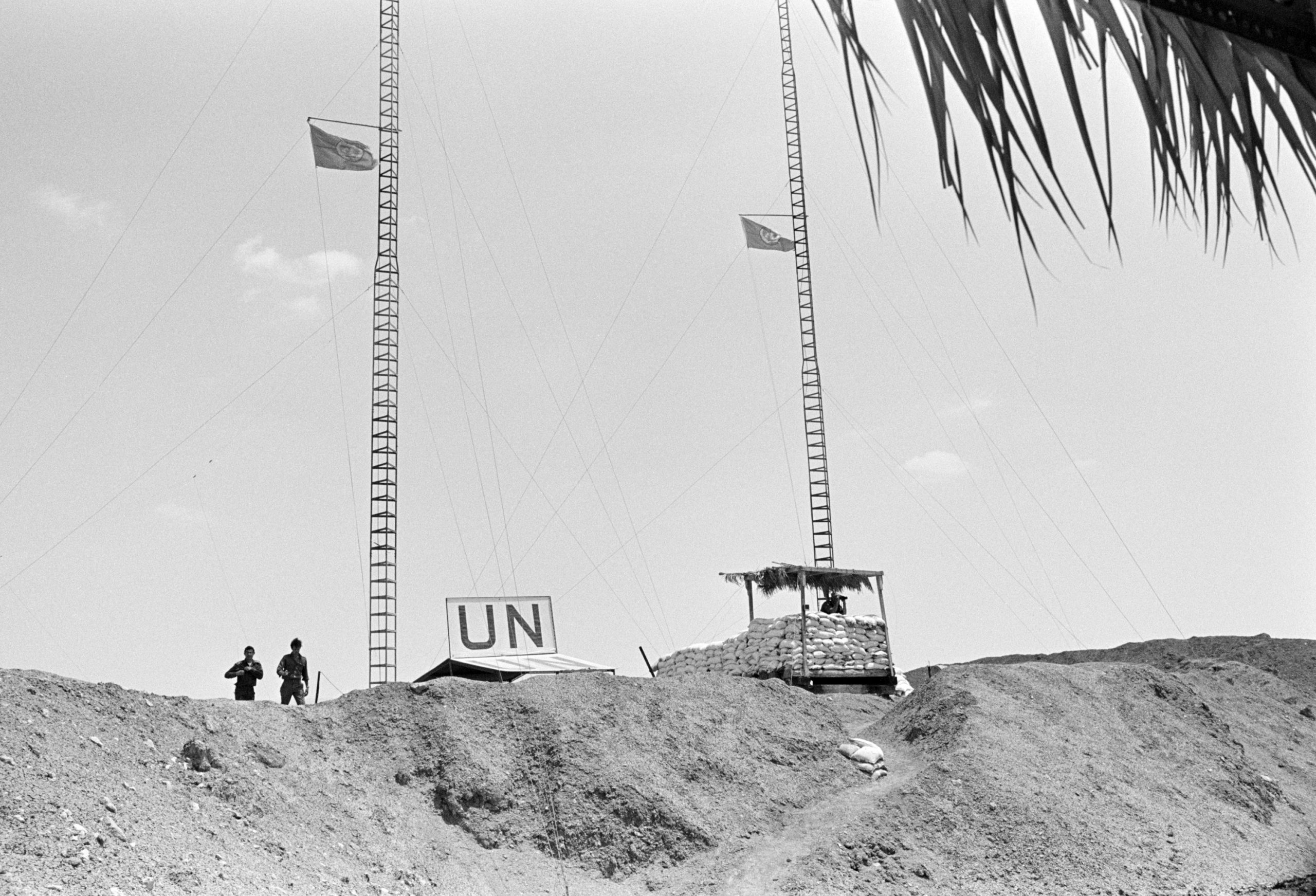 WAR ALONG THE SUEZ

Major General Vincent F. Savino (Retd) talks about his time along the Suez Canal as a UN Military Observer

Cover image: A view of Observation Post Red, April 22, 1973, located East Side of the Suez Canal in Israeli-occupied Sinai. The U.N. vehicle in the foreground was destroyed during the 1969 shelling. (UN Photo/Yutaka Nagata)

Following the Israeli victory in the Six-Day War in June 1967 – the entire Egyptian Sinai Peninsula up to the eastern bank of the Suez Canal was left in Israeli hands. Egypt was determined to regain its lost territory. Rebuilding its military Egyptian President, Gama Abdel Nasser, launched the War of Attrition along the Bar Lev Line (a chain of fortified Israeli positions on the Eastern bank of the Suez Canal) on 8 March 1970. Back in Ireland, then Captain Vincent Savino was stationed in Defence Forces Headquarters and dealing with the emerging Troubles in Northern Ireland.

“1969 saw the Defence Forces mobilising due to the situation in the North. I was located in the Quartermaster General’s office and believe me when I tell you it was mayhem. In the middle of all this, officers were being sought for a one-year tour of duty with the United Nations Truce Supervision Organization (UNTSO). I’d been in the Middle East before while serving in Cyprus some years previously and it caught my attention. We had had people wounded in the region and people were reluctant to go. Along with two others I volunteered in December of that year”.

UNTSO is the UN’s oldest mission. It was founded on 29 May 1948, to monitor the ceasefire agreements following the Arab-Israeli War. Since then, UNTSO has expanded to supervise the General Armistice Agreements of 1949 and the observation of the ceasefire in the Suez Canal area and the Golan Heights following the Six-Day War of June 1967. To carry out its mission UNTSO deploys unarmed Military Observers. Following the Six-Day War, 90 such observers were deployed in the Suez Canal Sector.

Selling his car and packing up his wife and six children Captain Savino headed off to Israel.

“In those days there weren’t the allowances that there are now. Hence why I had to sell my car. We were given a $1½ extra a day.  I settled my family just outside Jerusalem in the Jordanian administered sector.” In Jerusalem, the observers were given a week to acclimatise at UNTSO HQ. They met up with other new observers and were briefed on the mission. The other new observers came from all over the world including Argentina, Austria, Chile, Finland, France and Sweden. “We met UNTSO Chief of Staff Lt Gen Odd Bull from Norway who went through the current situation. “I often think back to that week. Nothing could have prepared us for what we were about to go through.”

At the end of the week the new observers left Jerusalem for duty along the Canal at 5am driving south to the UNTSO Control Centre at Kantara, which was some 40km from the line of Observation Posts (OPs). This leg of the journey took four hours. The Control Centre was responsible for all OP’s along the East Suez; of which there were seven at the time. Each OP was designated by a colour; Blue, Copper, Pink, Green, Silver, Orange, and Violet, On the West Suez in Egypt UNTSO OP’s were designated by the phonetic alphabet such as OP Echo and OP Foxtrot.  In theory, observers were meant to rotate between the OPs and the Control Centre every five days. They would soon learn this was not always to be the case.  “We received a briefing ‘you are going to OP Pink’. Myself and an Austrian officer were paired up. An armed Israeli Lieutenant was assigned to us as our liaison. Grabbing our kit bags and rations we were off again. Our convoy consisted of four jeeps. It was another two-hour drive to OP Pink. We were coming up close to our destination when over the radio, ‘Patrol Pink stop your vehicles firing ahead’. Stopping our vehicles we got out, put on our flak jackets and got in behind a sand wall. From the other side all we could hear was sounds of mortar fire and machine gun fire. I thought what the…. there’s a war going on. What am I doing here?”

The Suez Canal links the Mediterranean Sea with the Red Sea. It is 193.30km (120.11miles) long, 24m (79ft) deep and 205m (673ft) wide. Its length and width have proven formidable obstacles during the conflicts between Israel and Egypt. “In parts you actually look up at the Canal. Because of the war the Canal was closed and several ships were trapped. In the desert you were looking up at a ship. It was bizarre.”

With the Egyptians poised on the West Bank and the Israelis poised on the East Bank both militaries positioned themselves near to UN OPs in the hope that the opposing side wouldn’t fire on an area where the UN were located.

OP Pink was only a few hundred yards from the edge of the Canal located on the Eastern shore of Little Bitter Lake. It consisted of no more than a rundown caravan with a radio mast and a sandbagged bomb shelter. This was home for Captain Savino’s first week along the Suez. “There we were in the middle of a war radioing back to Kantara reporting on the shelling and airstrikes. Our first tour of duty lasted only seven days due to the constant shelling. We spent most of our time in the shelter which was an iron beehive construction with sandbags all around it. Crouched inside with the Austrian and the Israeli officer you had to sit there and listen to the shells landing all around. During long periods of shelling you were left with only army rations to eat. It was stressful at times”.

OP Pink was eventually relieved after seven days and the observers rotated back to Kantara. Six days in Kantara and then back to the Canal. Daily routine in the OP’s began at 07:00. At this time Kantara transmitted the music of Lillibullero across the airwaves to wake everyone up. The OP’s responded by sending in their situation reports which gave the number of observed air attacks, tank and artillery shellings and small arms fire. “While on OP Copper I concluded my report by saying, ‘this is the 100th air attack reported by this OP.’ That was just over a six-day period.” To constitute an air attack the attack had to last 15 minutes, otherwise it was just a bombing.

The Egyptians primarily used Soviet made equipment, while the Israelis primarily used Western made equipment. In the air the observers witnessed Egyptian flown Russian made Mig’s and Sukoi’s up against Israeli flown Fouga Magisters, Mirages and Skyhawk’s. “We would watch as the Egyptians tried to build surface to air missile emplacements. The Israelis would fly in and take them out. One time we were sent to a crash site of an Israeli spy plane which had been shot down. When we got there parts of the plane and bodies were all over the place. We found parts of a Russian made missile with Cyrillic writing which had clearly shot down the plane”.

“We saw it all. Heavy artillery fire, raids across the canal, aircraft coming in and dropping napalm, tank and artillery duels. All we could do was report each incident. When the firing started hitting close to us we would radio our fellow UNTSO observers on the Egyptian side and try and get them to tell the Egyptians to stop firing at us. I was lucky I never got hit bar a few scratches. During my time there we suffered five casualties. A Swedish officer and Argentinean officer were killed and three others badly wounded. We had several other minor injuries.”

With the Israeli positioning themselves close to UN positions damage from Egyptian aircraft, artillery and tanks was inevitable. Kantara was so badly damaged that it had to be abandoned and a new Control Centre was established at an old railway station in Raba. At Raba, the observers had to work under canvass. Across from them was a Bedouin village. Two OPs were also withdrawn leaving five in operation.

“The Israeli tank commanders would roll up on ramps behind the sand wall along the Canal. The minute their turret cleared the wall they’d fire and roll back down. This would go on and on. Once I saw this young tank commander in his turret with his head up. His tank rolled up the sandwall; he took out a can of coke, drank it and fired. They were doing this to provoke the Egyptians to return fire and give away their positions. During my time the Israelis were losing at least one soldier killed every day.”

In the middle of rotating from OP to OP Vincent was able to take leave to Jerusalem to visit his family. “Having the family there was wonderful and a great relief. Once we got accommodation and schools sorted, they all had a lifetime experience. When I got leave we used to travel all over Israel, up into Damascus, Lebanon and over to Cairo in Egypt. I am delighted to say that the travelling bug has not left any of my children since”.

The War of Attrition continued until August 1970 and ended with a ceasefire. The ceasefire lines remained the same as when the war began and with no real commitment to serious peace negotiations. With the end of the war the Suez became much calmer. Tensions however remained high between Israel and Egypt and sporadic firing across the Canal still took place. The UNTSO observers found themselves having to rebuild their bombed OPs and getting on with their mission. At the end of year one, now Commandant Savino was a Special Duties Officer responsible for looking after and improving the OP’s. “I was given the task of trying to improve the OPs. We were mixing cement, sometimes under fire, trying to make the shelters and living conditions that little bit better. This is all with a backdrop of the Canal, heat, sun and sand. Back then there was no internet or satellite TV. The people at home had no idea what was happening. It was some experience. One which I’ll never forget”.

Commandant Savino then volunteered for an extension of another year. During that time he became an Assistant Operations Officer in the Control Centre and in the last few months an Operations Officer in charge of the area. In 1973 the region was torn apart again during the Yom Kippur War. Today UNTSO observers are still carrying out their mission in the Middle East. Over the years 18 observers have lost their lives in the service of peace, two of whom were Irish. Commandant Thomas Wickham was shot dead in Syria in June 1967 and Commandant Michael Nestor was killed by a roadside mine in September 1982 in Lebanon.

Vincent Savino went on to serve until 1989 retiring at the rank of Major General. He is currently President of the Irish United Nations Veterans Association.

“Peacekeeping is not a job for soldiers, but only soldiers can do it.”

Britain gives up Suez Canal after 72 years of occupation