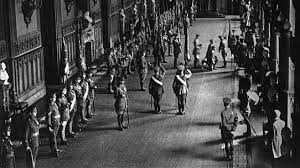 Sunday 12 June marks the centenary of the disbandment of the Irish regiments of the British Army from the south of Ireland.
On 12 June 1922, King George V received the Colours of The Royal Irish Regiment, The Connaught Rangers, The Prince of Wales’s Leinster Regiment, The Royal Munster Fusiliers and The Royal Dublin Fusiliers for safekeeping at Windsor Castle where they remain to this day. The South Irish Horse disbanded on 31 July that year.
To mark the centenary the Combined Irish Regiments Association held a parade at the Cenotaph in London this morning, while in Dublin the regimental associations will held a service in St. Patrick’s Cathedral, Dublin.

The Combined Irish Regiments Association organised a wonderful parade to mark the occasion. Standards were paraded in to the music of The Pipes and Drums – London Irish Rifles Association. Members on parade included the Royal British Legion, the Leinster Regiment Association, Irish Guards, Royal Irish Regiment, and the Irish Defence Forces, along with veterans and family descendants of those who served.

At St. Patrick’s Cathedral, the beautiful service also remembered the disbandment of the South Irish Horse. The event was organised by the Royal Dublin Fusiliers Association on behalf of all the regimental associations including: the Royal Munster Fusiliers, Connaught Rangers, 18th Reg of Foot Royal Irish Regiment Association, and the Leinster Regiment association.
To the pipes of Anthony Byrne, the regimental standards marched through the cathedral to the ‘Last of the Great Whales’. A beautiful ceremony followed with regimental songs sung by the St. Patrick’s Cathedral choir.
In attendance was the Lord Mayor of Dublin, Cllr Alison Gilliland, Ambassadors, members of the Oireachtas, the Irish Defence Forces, the Royal Irish Regiment, and descendants and family of those who served in the regiments.
Lest we forget.