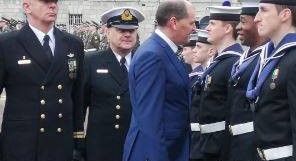 Celebrations in Collins Barracks for 90 Years of the Reserve

Celebrations took place today in the National Museum of Ireland, Collins Barracks, to mark the 90 anniversary of the formation of Reserve Defence Forces.

Although reserve elements had been experimented with by the fledgling Irish Defence Forces the first formal reserve component opened up to the general public for part time military training was in 1929 with the formation of the Volunteer Reserve Force. This was followed shortly by the Officer Training Corps with units established in several universities around the country. With Fianna Fáil taking power in 1932 a new force was established in 1934 – The Volunteer Force. Members and supporters of Fianna Fáil were encouraged to join; many had fought in the Civil War on the anti-treaty side.
The Volunteer Force was an all-arms undertaking with a high level of training for officers and NCO’s. it peaked at a strength of 10,578 in April 1935. On 1 September 1939 its strength was 257 officers and 6,986 other ranks. Interestingly the force was territorially organised in regiments such as The Regiment of Oriel; The Regiment of Leinster; and the The Regiment of Dublin. The Regiment of Pearse was added in 1935.

With the outbreak of World War II and Emergency was declared and the permanent and reserve elements of the Defence Forces were expanded quickly. The Local Security Force (LSF) amd the Local Defence Force (LDF) were established to help with the war effort. This expansion resulted in numbers never seen before or since in the establishment of the Irish Army. In 31 March, 1941, the regular force peaked at 41,463, while in June 1943 the LDF reached its highest enlistment number of 103,530. Many photographs of the period show pre-war officers and soldiers, Volunteer reservists, and Emergency enlistment soldiers wearing and carrying their respective equipment. During this period a reserve element for the Marine Service was established called The Maritime Inscription.

Following the end of hostilities in 1945, the Emergency Defence Forces were demobilised. In 1946and 47 all pre-existing reserve forces were disestablished. The reserve element was reconstituted into the First Line Reserve (former permanent personnel) and the Second Line Reserve – An Fórsa Cosanta Áitiúil (FCÁ) (Local Defence Force) which was made up of part time volunteers. An Slua Muirí became the maritime reserve component of the Naval Service. The period 1959 – 1979 was known as ‘integration’ whereby the Defence Forces was structured in six brigades regular and FCÁ. This of course was during the Cold War and the structure allowed the Defence Forces to mobilise quickly if needed. Throughout this period the reserve played a prominent role in supporting their regular counterparts who were increasingly called upon during the Troubles.

In 2005 An Fórsa Cosanta Áitiúil and An Slua Muirí were stood down and reconstituted into the Reserve Defence Force (na hÓglaigh Cúltaca) consisting of the Army and Naval Reserve. Initially the reserve was organised in their own units with parent regular units to which they would train with and support. In 2013 the ‘Single Force Concept’ was introduced whereby RDF sub-units would now be attached to PDF Army units. Throughout its history the reserve has always relying upon volunteers who give up their free time to support the Permanent Defence Forces and conduct duties around the country when called upon.

The RDF are currently recruiting. If you fancy a part time carrier in the Army or Navy check out a unit near you.