A Wexford Man’s Plans for D-Day 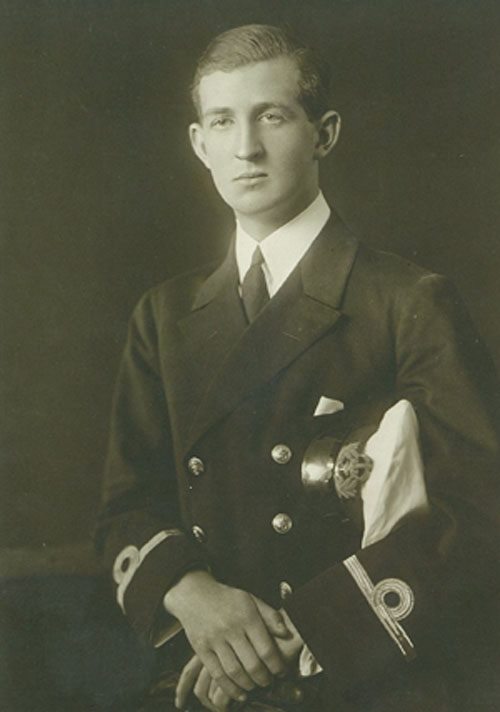 A Wexford Man’s Plans for D-Day

Pinnacle to the invasion’s success were combined operations. At the centre of these operations was an Wexford man – Captain Rickard Donovan

Cover image: Personnel and equipment arriving at Normandy by air and sea following the D-Day invasion in 1944. (Photo: US National Archives and Records Administration, 26-G-2517.)

Rickard Donovan was born in 1898, at Ballymore near Ferns in County Wexford. At the age of 13, he was sent to the Royal Naval Colleges in Osborne and Dartmouth, England to qualify for a career in the Navy. At the start of the Great War, he was promoted to midshipman and was serving on HMS Ocean until it was hit by a mine and sunk in the Dardanelles in March 1915. Rickard was reassigned to HMS Agamemnon from April to June 1915, followed by HMS Exmouth until January 1917, and finally HMS Blenheim to August 1917.

He travelled home in May 1916 for his father’s funeral. At this stage he had been promoted to Sub Lieutenant. For the remainder of the war, he became interested in and trained as a submariner, a service which was still in its infancy and extremely dangerous due to the many leaks and hazardous fumes on board the vessels. He did so well in this area of service he was promoted to Lieutenant by 1919.

Despite this promising start to his career, Rickard’s health was badly affected by his time aboard submarines and he contracted tuberculosis. By 1927, having reached the rank of Lieutenant Commander, the disease had progressed, he was invalided out of the Navy and granted a disability pension.

Times were hard for Rickard during the inter-war years and he worked in many areas, engineering, shipbuilding, at one stage he was a door-to-door salesperson selling china in London.

At the outbreak of World War II in 1939, 41 year old Rickard reenlisted in the Armed Forces, and was assigned to Combined Operations which drew on the best practices and expertise available within the Royal Navy, the Army and the Royal Air Force to create a unified force. In the following years, Rickard was rapidly promoted, suggesting that he was highly regarded by his colleagues, comments in his service records show this to be true.

A department of the British War Office set up during Second World War to harass the Germans on the European continent by means of raids carried out by use of combined naval and army forces. It comprised background staff whose job was to plan operations and to develop ideas and equipment to harass the enemy in any way possible. It also covered all those who worked with landing craft up to and including the landing ships that were used in the various amphibious operations. Among the projects undertaken by Combined Operations was the surveying of landing sites for invasions, including those of Sicily and Normandy. These were carried out by Combined Operations Pilotage Parties made up of members of the Royal Navy, Royal Marines, Corps of Royal Engineers and Special Boat Service. Combined operations were involved in many misinformation campaigns (fake news!) which took place preceding the D–Day landings.

In 1942/43 Rickard was part of the Plans Division, In August 1943, he was promoted to Assistant Director of Plans with an Acting Rank of Captain. In December 1943 Rickard was again promoted to Deputy Director of Combined Operations, and in 1944 he was made Senior Deputy Director. Rickard was one of the small number of people responsible for working out the detailed plans necessary for Operation Overlord (D-Day), and for directing its course. It also appears that Rickard took the lead on most day-to-day activities in this period. Letters from Lord Mountbatten to Rickard are amongst the family memorabilia in Ballymore County Wexford.

Churchill wrote to Mountbatten following his visit, with others, to the Normandy beaches on D Day + 6 (12 June 1944):

“Today we visited the British and American Armies on the soil of France. We sailed through vast fleets of ships with landing-craft of many types pouring more men, vehicles and stores ashore. We saw clearly the manoeuvre in progress of rapid development. We have shared our secrets in common and helped each other all we could. We wish to tell you at this moment in your arduous campaign that we realise how much of this remarkable technique and therefore the success of the venture has its origin in developments effected by you and your staff of Combined Operations”.

Confirmation that Rickard was at the centre of many operations carried out by Combined Operations were included in his own service records from the end of the war in 1945. Captain Robert Ellis, Assistant Chief of Combined Operations, wrote of Rickard ‘It is my opinion that the successful expansion of our naval amphibious resources owes much more to his brilliant work than to any other single factor. I have been particularly struck by his loyalty and patience in difficult and disappointing circumstances, when these have arisen.” [TNA, ADM 196/120, ADM 196/146, quote from ADM 340/242]

After D-Day he continued in Combined Operations turning his skills towards the campaign in South East Asia as Chairman of the Eastern Landing Craft Base Committee in 1945. In 1945 he received a CBE from the UK and a Legion of Merit from the USA in recognition of distinguished service to the Allied cause during the World War II.

Rickard Donovan retired from the Royal Navy in May 1946, medically unfit, he had suffered greatly with the untreatable TB throughout the war, contracted from his time spent serving on Submarines years earlier.

Rickard Donovan died in London in 1952, at the age of 54. He was buried on the side of a hill overlooking the Irish sea, at the family farm in Ballymore, Co. Wexford. He always considered this as his home and visited regularly even during the height of WW2 to keep strong family ties with his mother and sisters.