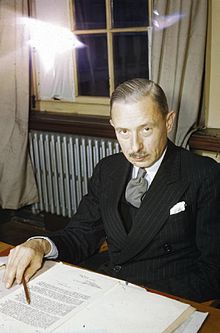 A Celbridge Solider, Spymaster, and Diplomat

Our current project – Celbridge’s Military Story – has highlighted the point that you do not have to go too far in order to unearth remarkable stories of men and women who contributed so mush to their community and Ireland. This week we met again native and local historian Col. (Retd) Brendan O’Shea who took us behind the walls of Donaghcumper/Donnacomper estate. The estate is directly across the road from Donaghcumper Cemetery on the Dublin road, just up from Super Valu. Behind the walls is a beautiful Tudor Revival style house which was home to the Kirkpatrick family for over a century. Many of the older generation of Celbridge will remember Ivone Augustine Kirkpatrick – the diplomat who met Benito Mussolini, Adolf Hitler and identified Rudolph Hess.

Sir Ivone Augustine Kirkpatrick, GCB, GCMG was born 3 February, 1897, in Wellington, India, to Colonel Ivone Kirkpatrick of the South Staffordshire Regiment, and Mary Hardinge, daughter of General Sir Arthur Edward Hardinge, Commander-in-Chief Bombay Army, and Governor of Gibraltar. In fact Mary was a former Maid of Honour to Queen Victoria. A Roman Catholic, Kirkpatrick was educated in Downside School in England from 1907 to 1914. On the outbreak of the Great War he enlisted and was commissioned in November 1914 in the Royal Inniskillings Fusileiers. During the Gallipoli campaign in August 1915, Kirkpatrick was severally wounded and returned home. Although being accepted to Balliol College, Oxford, he opted to return to war and was posted to GHQ Intelligence Service Wallinger London. During the last year of the war he was stationed in Rotterdam, the Netherlands, and worked as a spy master, running a network of Belgian resistance agents operating in German-occupied Belgium.

Following the war in 1919, he began a long and active career with the British diplomatic service and found himself first stationed as far away as Brazil. By 1928, he had risen to the position of first secretary. On 10 January 1929, he married Violet Caulfield, daughter of Colonel Reginald James Cope Cottell, an army surgeon, they had one son, Ivone Peter and one daughter, Cecilia Sybil.

Ivone was then posted to the British Embassy in Rome from 1930 to 1932; chargé d’affaires at the Vatican in 1932-1933; and first secretary at the British Embassy in Berlin from 1933 to 1938. While serving at these embassies Kirkpatrick got to witness fascism taking root in the heart of Europe and the gathering storm that lay ahead. He made it very clear his detestation for the Nazis.

On the outbreak of World War II Kirkpatrick took up a similar role to that of the end of the last war; he was appointed Director of the Foreign Division of the Ministry of Information in April 1940. As part of this role he became Controller of the European Services of the BBC in October 1941. Following Rudolph Hess’s flight to Scotland in May 1941, it was Kirkpatrick who was sent to formally identify and interview Hess as he had met him in the 30s. His report was shown only to Prime Minister, Winston Churchill, Foreign Secretary Anthony Eden, Lord Privy Seal Clement Attlee and Minister of Aircraft Production Lord Beaverbrook. In September 1944 Kirkpatrick was appointed to organise the British element of the Allied Control Commission for Germany and then at Supreme Allied Headquarters as British political adviser to U.S. General Dwight D. Eisenhower.

Following the war, he became Permanent Under-Secretary for the German Section at the Foreign Office in 1949. In June 1950, Kirkpatrick was appointed by King George VI as British High Commissioner for Germany. He took a major role in the negotiation of the Bonn Conventions – 1951–2 – which terminated the occupation regime. In November 1953, Kirkpatrick returned to London to became the Permanent Under-Secretary at the Foreign and Commonwealth Office. His term as Under Secretary culminated in the 1956 Suez Crisis. He was strongly in favour of a hard line against Colonel Nasser.After retiring from the Foreign Office in February 1957 Kirkpatrick served for five years as chairman of the Independent Television Authority.

This project is supported by Kildare County Council.