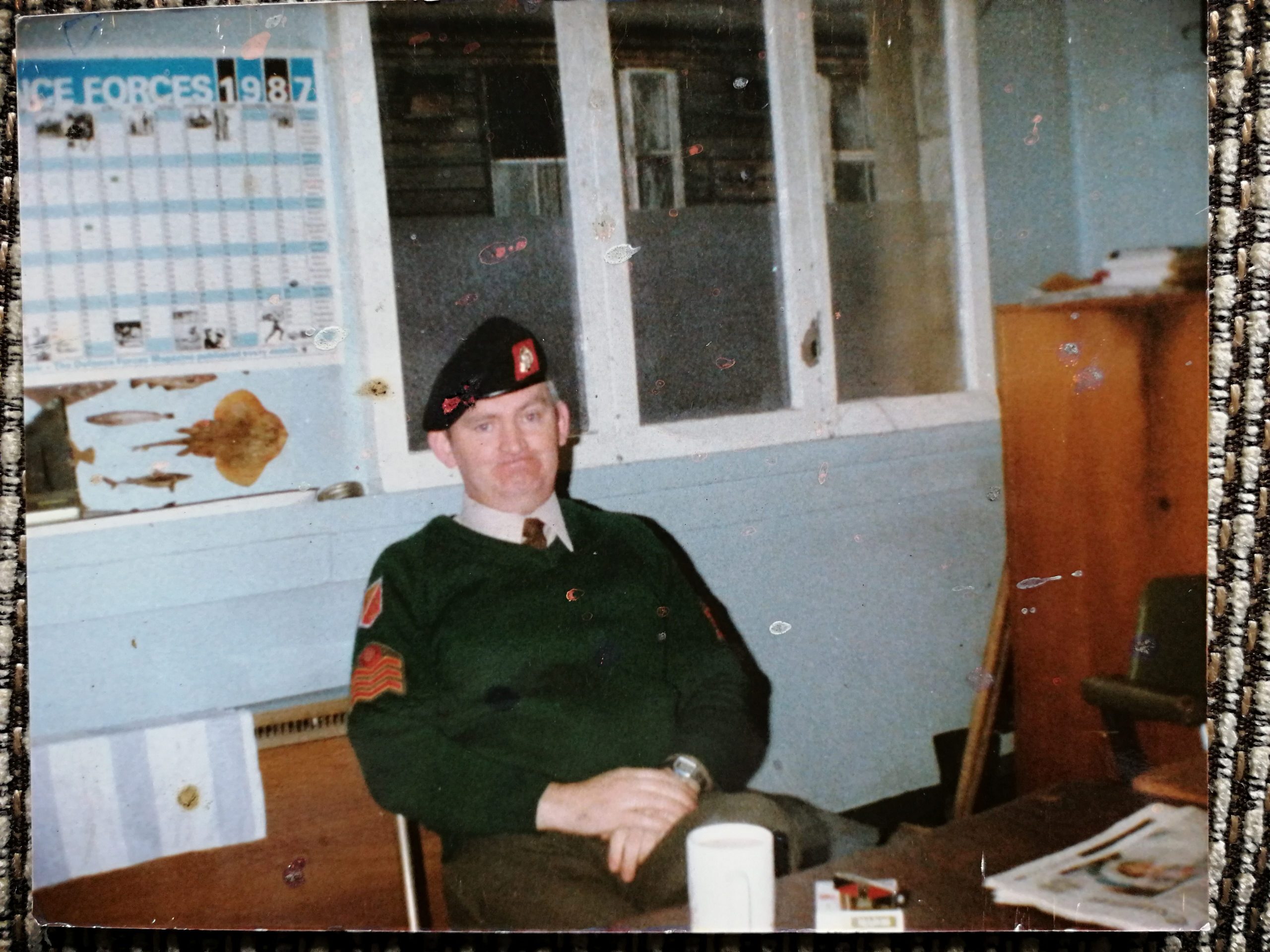 Veterans are a key to any military story; they are the people who served, they are the people who were there. Recording their story helps preserve our past and can give us lessons for the future. There isn’t a community in Ireland where you will not meet an ex-service man or women. For our Kildare Veterans and In the Service of Peace project, we met up with retired Company Sergeant Liam White, who has lived in North Kildare with his family since 1986. Many people in Celbridge may remember Liam and his wife Patricia from when they ran the Order of Malta unit in Celbridge in the 1990s.

Liam, who is originally from Dún Laoghaire, first joined the Irish Defence Forces/ Óglaigh na hÉireann in 1964 when he enlisted with B Company, 21st Infantry Battalion FCÁ. He has fond memories of marching in the annual 1916 commemorations during those early years. In 1967 Liam joined the Permanent Defence Force and was sent down to the Curragh Camp for recruit training. After passing out Liam was posted to McKee Barracks Company; the support unit for Defence Forces Headquarters. At this time the Army was only 7,500 strong. It was not long before Liam found himself on an NCO course and on 26 December 1968, he was promoted Corporal. With the outbreak of the Troubles the Defence Forces were put on high alert. Reservists were called up, and centres established to take in potential people fleeing the hostilities. When the border was established, Liam recalled periods when soldiers were meeting themselves coming off duties and patrols. The army had to expand due to the Troubles and initially there was no relief. Patrols, road blocks, and watching or hearing shootings along the border between Republicans and British Forces became the norm. On one occasion Liam collapsed after not sleeping for four days straight. One of the pictures Liam kept shows him having Christmas dinner while on the border.

In 1970 Liam was then assigned as a Cadre Training NCO with the 21st Infantry Battalion FCÁ which took him all over the battalion area of South Dublin and North Wicklow. His first deployment overseas was with the 20th Infantry Group, United Nations Peacekeeping Force in Cyprus (UNFICYP) in April 1971. During this period tensions were high between the two communities on the island; the mission brought new challenges for the young Corporal. Promoted Sergeant, Liam deployed overseas again in April 1974 with the 26th Infantry Group, United Nations Emergency Force (UNEF II) in the Sinai. Not a blade of grass could be found in the blistering hot desert. The Irish men found themselves once again in between two heavily armed factions and vast areas of unexploded ordnance and mines. The unit were only settling in when the Dublin and Monaghan bombings took place at home and the unit was rapidly brought home by the end of May 1974.

Liam served in various appointments in Defence Forces Headquarters including with An Cosantóir – the Defence Forces magazine and the Chief of Staff’s Branch. Liam retired from the Defence Forces in 1989 as a Company Sergeant. Thank you to Liam for telling his story and for his long service at home and overseas.

This recording is part of our Kildare Veterans series and In the Service of Peace – exploring Ireland’s contribution to world peace: a project in conjunction with The Organisation of National Ex-Service Personnel, The Irish United Nations Veterans Association and The Association of Retired Commissioned Officers. This production was made possible with support by Kildare Library Services, Kildare Creative Ireland and the Community Foundation.