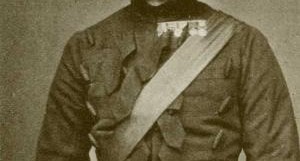 It as a real honour today to visit the graveside of Celbridge’s own Victoria Cross recipient at Mount Jerome Cemetery in Dublin: Lieutenant Colonel John Augustus Conolly. Growing up in Celbridge I knew nothing of this man or his service. We hope by recording his story it will forever be a part of Celbridge.

John Augustus Conolly was born on 30 May 1829 in Castletown, Celbridge, to Edward Michael Conolly MP and Catherine Jane, daughter of Chambre Brabazon Ponsonby-Barker.

John enlisted in the 49th Regiment of Foot (later the Royal Berkshire Regiment, today The Rifles) and served in the Eastern Campaign/Crimean War of 1854. He was present at the Battles of Alma and the Siege of Sebastopol. On 26 October 1854 he was shot through the chest and seriously wounded after a Russian attack at Shell Hill. The Russian attack was repulsed by heavy fire from Allied guns, and infantry led by Lieutenant Conolly. Field Marshal Sir Evelyn Wood VC later wrote that the Russians: ‘fell back and our infantry pursued them, being led most gallantly by Lieutenant Conolly’.

For this gallantry, Conolly was awarded the Victoria Cross (gazetted 5 May 1857) and promoted into the Coldstream Guards. At Hyde Park on 26 June 1857 Queen Victoria awarded the first Victoria Cross’s to 62 officers and men; one of these gallant heroes was a Celbridge man, then Brevet-Major John Augustus Conolly.

John Conolly was eventually promoted to Lieutenant Colonel and retired from the Army in 1863. He became a Sub-Commissioner in the Dublin Metropolitan Police, and later Resident Magistrate for the Curragh of Kildare. He died on 23 December 1888 in the Curragh, and was laid beside his wife at Mount Jerome Cemetery, Dublin.

Lieutenant Colonel John Augustus Conolly VC is remembered with pride at Castletown House and Parklands, the Berkshire Regimental museum and the Guards Museum who kindly helped us with images of John Conolly.

This project is made possible with funding from Kildare County Council.