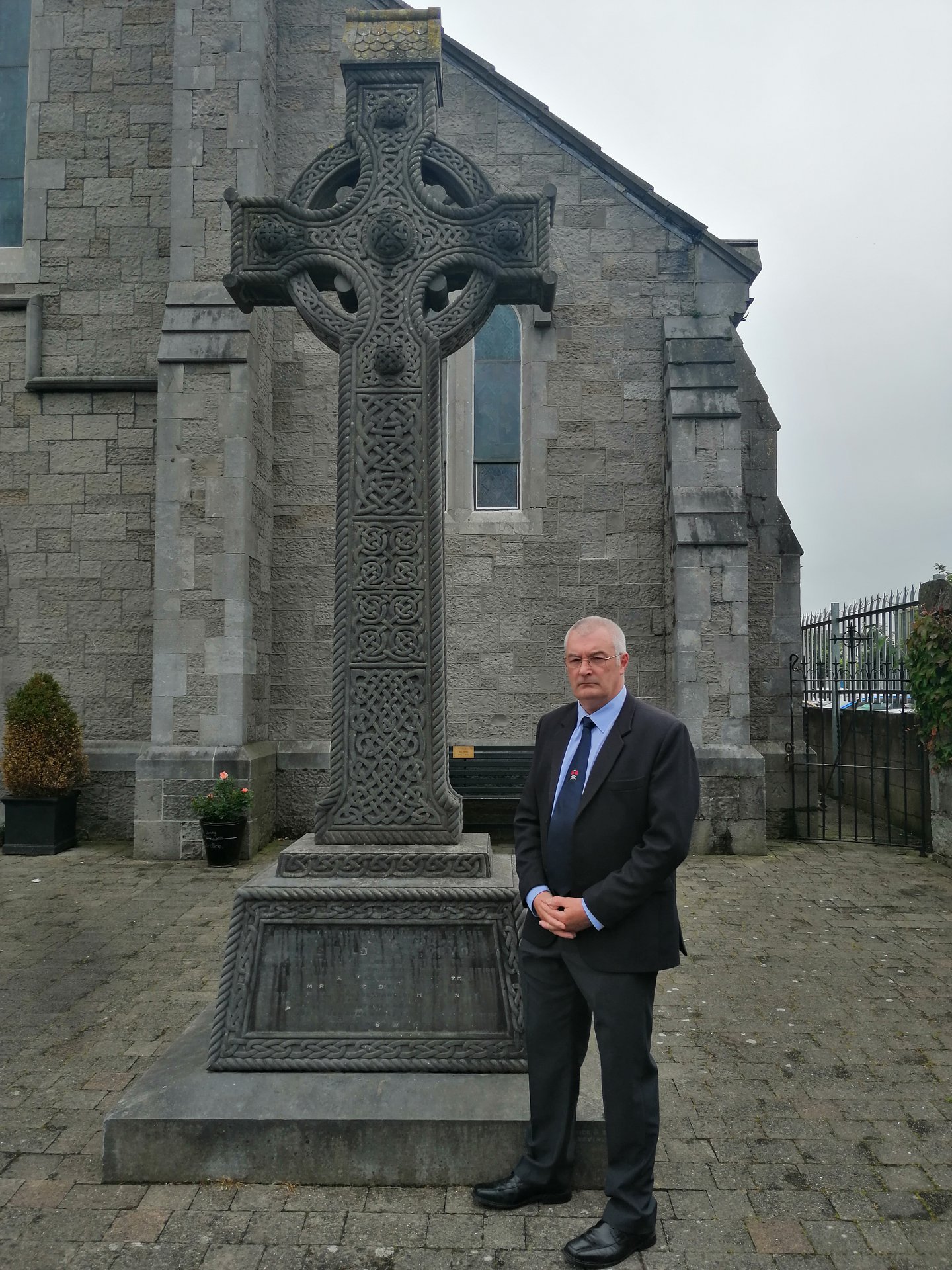 We are starting our work with the Irish Military Heritage Foundation with Celbridge’s Military Story and the story of Colonel Sir Gerald Dease.

Colonel Sir Gerald Richard Dease K.C.V.O. is a all but forgotten Celbridge figure. His name may be forgotten, but everyday people pass his monument just off the main street. In the grounds of St. Patrick’s church is a Celtic Cross. With a faded inscription it is no wonder that today most people in the area pass the cross taking no notice or questioning why it is there. The cross in many ways highlights how our history can easily pass into memory; apart from the knowledgeable few, most just think the cross is to a local priest.

In fact, the cross was erected in 1904 by the people of Celbridge in memory of Col. Sir Gerald Richard Dease K.C.V.O., of Celbridge Abbey. We met Celbridge native and European Trustee & Education Officer Ireland, The Western Front Association, Col. (Rtd) Brendan O’Shea to tell the story of Sir Gerald Dease and this chapter of Celbridge’s Military Story.

Born on 7 July 1831, Gerald Richard Dease was the third child of Gerald Dease and Elizabeth O’Callaghan of Turbotstown, Mayne, Co. Westmeath. Like many well-off Catholics he was educated at Stonyhurst College, Lancashire, England before returning to Ireland. He married Emily Throckmorton, daughter of Sir Robert George Throckmorton, and Elizabeth Acton, on 25 November 1863. Later he was appointed Justice of the Peace for Counties Kildare and Meath, and became a Director of the Great Southern & Western Railway before being appointed a Director of the Bank of Ireland (the predecessor to the Central Bank) and its Governor between 1890 and 1892. On 27 July, 1881, Dease was appointed Major and Honorary Lieutenant Colonel of the 4th Battalion, Princess Victoria’s (Royal Irish Fusiliers). He also served as the Chamberlain to the Lord-Lieutenant of Ireland and was involved in the organisation of several royal visits to Ireland. For his excellent service he was Knighted in 1897, being made a Companion of the Royal Victorian Order in 1900 and a Knight Grand Cross of the same order on 11 August, 1903. Locally Sir Gerald Dease served on Kildare County Council on several occasions and served as Chairman of the Celbridge Board of Guardians [the Workhouse] (today Colourtrend paint factory) and within both bodies he became an advocate for improved conditions for the poor. He lobbied extensively for the creation of a National University to which Catholics would have full access. It is for these efforts he was most remembered. Gerald and Emily had three children: Eveline Mary Dease, Major William Gerald Dease, and Arthur Joseph Dease. Following his death on 18 October 1903, the people of Celbridge erected the Celtic Cross in recognition of this remarkable man.

This project is support by Kildare County Council.